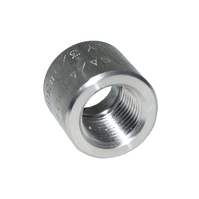 Threaded End Half Coupling
What is half coupling?
Half coupling is a very short length of pipe or tube which is used for small bore branching from a vessel or large bore pipe. It allows two pipes or tubes to be connected with a socket or thread-typed end. It has a socket or thread end at only one side. Another end will be welded or fastened to the piping. Half coupling is made of SS316 or A105 materials. There are two working pressure for half couplings which are 3000# and 6000#.

What is the function of half couplings?
During the piping or plumbing installation, it is often necessary to connect several lengths of pipe to facilitate changes in directions or crossing of obstacles. Thus, this requires a relatively rapid way of connecting the pipe sections while retaining the comprehensiveness of the pipes in the process. There are variety functions of a half coupling as following: In particular, hose is a readily identifiable example that utilizes a half coupling to connect. The threaded end is screwed onto a faucet while another end is clamped onto the hose. With piping, one end of the half coupling is screwed onto the pipe while the other end is made to be tightly inserted or welded onto the other end.

What is the difference between a coupling and a union?
Similar to couplings, a union also connects or joins two or more pipes during piping installation. However, a coupling is normally used for permanent joining by requiring solvent welding, soldering, or rotation (for threaded couplings).
In contrast, a union is a type of very compact flange connector. It comprises three components which are a nut, a female end and a male end. When the female and male ends are connected, the nut seals the joint by pressing the two ends tightly together. A union allows easy connection and disconnection of a part of piping systems. It eases the assembly process for fixing, maintenance or replacement in the future.

Industry application of Half Couplings:
A stainless steel threaded half coupling is applied in several industries such as printing machinery, automated plants, textile machinery, and other varied industries. Besides, half-couplings are also widely used in the aerospace industry. They serve as connectors to pressurized fuel piping. Furthermore, half couplings are used intensively on fire protection systems, air and water lines and many different lower pressure process lines.
​​SUBSCRIBE TO CHUAN KOK EMAIL
If you are interested in our products, please get in touch - we are ready to help you.